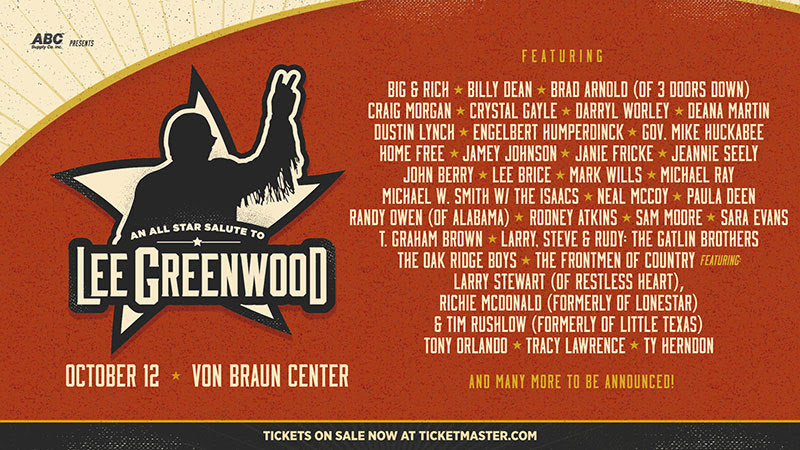 GOV. MIKE HUCKABEE AND PAULA DEEN TO MAKE SPECIAL PRESENTATIONS DURING THE EVENT

HUNTSVILLE, Ala. (Thursday, August 12, 2021) – With over twenty-eight Top 20 singles, including 7 number one hits, Lee Greenwood and his 40-year career will be celebrated in Huntsville, Alabama, on October 12, 2021, at the Von Braun Center with over 35 music artists performing during the All-Star Salute to Lee Greenwood. Today, music artists from multiple genres including legendary names like Engelbert Humperdinck and Tony Orlando, Grand Ole Opry stars Craig Morgan, Jeannie Seely, and The Gatlin Brothers along with rock star Brad Arnold of the group 3 Doors Down and country hitmakers Billy Dean, Janie Fricke, John Berry, Neal McCoy, T. Graham Brown, Tracy Lawrence, Ty Herndon all were announced to participate in the special celebration. The Issacs will join Michael W. Smith to create a ‘moment’ in the show and Dean Martin’s daughter Deana Martin will perform a duet with Humperdinck.

“I am so looking forward to this night. I am going to get to see so many of my friends that I have not seen in a while and to know they are coming to truly honor my career and songs really means a great deal to me,” says Greenwood.

A variety of ticket prices are available from $25 to VIP Packages, which include a private dinner and Meet & Greet with Lee Greenwood on Monday, October 11th. For purchase, visit Ticketmaster.com or the Von Braun Center box office.

ABC Supply Company presents An All-Star Salute to Lee Greenwood is being produced by Outback Presents in association with Lee Greenwood, Inc. Perry Hooper serves as Chairman of the VIP dinner/meet & greet event the night before the concert event.

ABOUT LEE GREENWOOD:
Throughout his expansive career, international country music icon Lee Greenwood has earned multiple CMA and ACM Awards, a Grammy Award for Top Male Vocal Performance on “I.O.U,” in 1985, and a multitude of other prestigious awards nominations. His discography includes twenty-two studio albums, seven compilation albums, seven No. 1 hits, and thirty-eight singles including songs like “It Turns Me Inside Out,” “Ring On Her Finger Time on Her Hands,” “She’s Lyin’,” “I Don’t Mind the Thorns if You’re the Rose,” “Dixie Road,” “Somebody’s Gonna Love You,” “Going Going Gone,” “You Got A Good Love Comin’,” among others. His stand-out hit “God Bless the U.S.A.” has been in the top five on the country singles charts three times (1991, 2001, and 2003), giving it the distinction of being the only song in any genre of music to achieve that feat. It reached the Top 20 of the Billboard Hot 100 chart shortly after 9/11. Known for his stand-out patriotism and support of the U.S. military, Greenwood has been honored with the Congressional Medal of Honor Society’s National Patriot’s Award and entertained troops on more than 30 USO Tours.