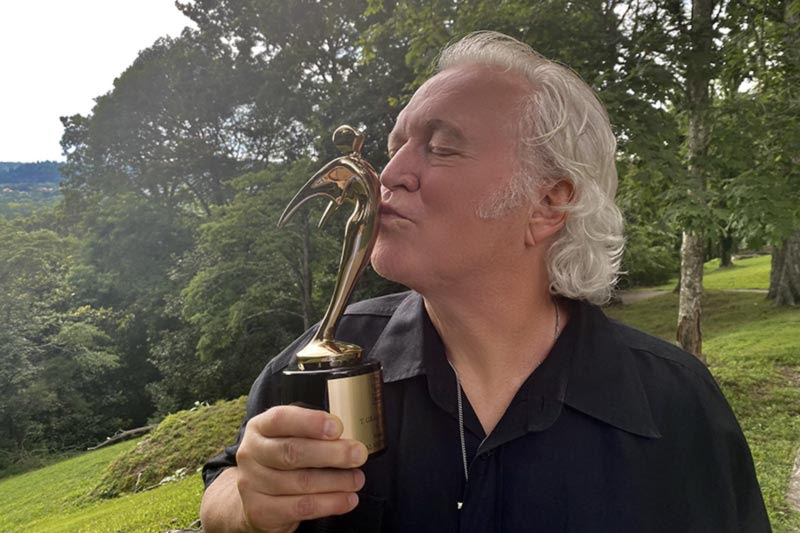 NASHVILLE, Tenn. – Country hit-maker T. Graham Brown and Canadian country music singer/songwriter Jason Blaine along with The 2020 CCMA All-Star Band joined forces during the pandemic to create an unforgettable duet version of “Rainy Night In Georgia.” As part of Darren Walter’s ‘Stonehouse Sessions,’ these incredible musicians connected from their homes and studios to produce this special, high-quality collaboration. As a result of this timeless duet, the performers are now celebrating their win for ‘Online: Music Video’ with the 42nd Annual Telly Awards.

“Getting to record one of my favorite songs with the best musicians in Canada was a great experience,” shares Brown. “Thanks so much to Darren Walters for inviting me to be a part of such a cool thing and to win another Telly award for it is icing on the cake. Jason Blaine is a great artist and Tony Joe White, who wrote “Rainy Night In Georgia”, is surely smiling down on us! I hope we can do this again, very soon!”

“This collaboration with such a country legend like T. Graham Brown along with these fantastic musicians was a welcomed surprise during such a weird year for our industry. I’m honored to win my first Telly Award and I must thank Darren Walters for the call and such a great job on the production and for pulling it all together from our different corners of North America,” says Blaine.

Founded in 1979, The Telly Awards honor excellence in local, regional, and cable television commercials as well as non-broadcast video and television programming. With the recent evolution and rise of digital video (web series, VR, 360 and beyond), the Telly Awards today also reflects and celebrates this exciting new era of the moving image on and offline. The Telly Awards annually receive over 12,000 entries from all 50 states and 5 continents, showcasing the best work created within television and across video, for all screens.

About T. Graham Brown:
T. Graham Brown has recorded 15 studio albums and charted more than 20 singles on the Billboard charts. He has had multiple number one hits in country, gospel, and blues. Brown’s voice is also recognized from his singing in advertising campaigns for McDonald’s, Disneyland, Almond Joy, Coca-Cola, Dodge Truck, Ford, Hardee’s, and many others including the Taco Bell “Run For The Border” television spots. In early 2015, Brown released his latest Grammy-nominated album, Forever Changed, which featured collaborations with Vince Gill, Jason Crabb, The Oak Ridge Boys, Jimmy Fortune, and more. In 2019, Brown became part of the SiriusXM family as host of Live Wire with T. Graham Brown airing monthly on Prime Country Channel 58. In 2020, Time Life partnered with T. Graham to reissue several of his classic albums and recently released his latest album Bare Bones. T. Graham Brown still actively tours throughout the year, including multiple appearances on the legendary Grand Ole Opry and television appearances such as Larry’s Country Diner and Country’s Family Reunion. Brown’s uniqueness has made him one of the most beloved and iconic performers of the day.

About Jason Blaine:
A multiple CCMA, SOCAN & CMAO award winner with over 20+ radio hits in Canada, six full-length albums, over 16 million digital streams, Jason still feels like he’s just getting started. Writing full time within Nashville’s publishing community, Jason has had cuts with Chris Janson, Parmalee, The Road Hammers, and Madeline Merlo. He currently resides in Hendersonville, Tennessee with his wife Amy and their four children. A new chapter of his career began in 2020 as he released new music and his most recent EP – “Go With Me”. The project was produced by Danick Dupelle (Emerson Drive, Tebey, Tyler Joe Miller) and breathes new life while lending itself to what Jason does best; great country music performed by one of Canada’s most distinctive voices. He tells stories of home, love, and nights on the town, all of the things that made us fall in love with country music. As a craftsman of songs, Jason found and wrote songs for the project which embody his artistry and move him into the next season of his career.

About Darren Walters and The Stonehouse Sessions:
The goal of the “Stonehouse Sessions” is to connect musicians from their homes, studios, or wherever they are in the world to create unique, studio-quality, musical collaborations during the Covid-19 pandemic.

Darren Walters has spent his life in the music industry. As a musician, he has performed with some of Canada’s best including Shania Twain, Tommy Hunter, Rita MacNeil, Jason McCoy, and The Walters Family. As a producer, engineer, promoter, and technical director Darren has found a new way to bring his creative skills to a new level.

Darren is also the Entertainment Director for his family-run, Walters Theatre in Canada, which is open for 4 months every summer. They sell out 120 shows and bring in artists from all over the world to perform at this unique setting.