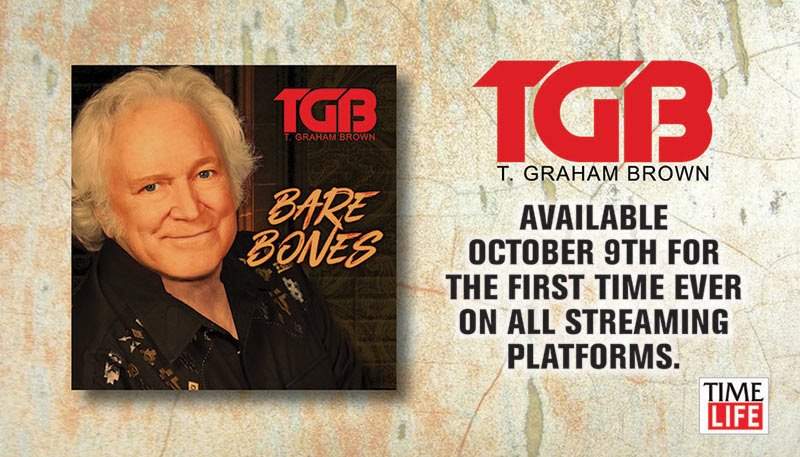 NASHVILLE, Tenn. – Country music favorite and host of SiriusXM’s LIVE WIRE show, T. Graham Brown will release an acoustic album for the first time in his career, Bare Bones, on October 9 through his partnership with Time Life. The album features stripped-down and reimagined versions of his biggest hits, including his number one hit songs “Hell and High Water,” “Don’t Go To Strangers,” and “Darlene.” ‘Bare Bones’ was produced by T. Graham Brown and Buddy Hyatt. Fans will be able to hear the 12-track collection on all major streaming platforms or purchase a limited-edition autographed CD on Brown’s website HERE. They’ll also be able to put in special requests for his autograph and ask him questions during his Facebook Live CD signing event on October 20 at 5 pm CT / 6 pm ET.

Visit HERE to listen or download on all major streaming platforms.

“This project is something I’ve wanted to do for a long time,” explains Brown. “There is a special vibe that you feel when it’s just a vocal and guitar. The lyrics are more present. It reminds me of why I recorded these songs in the first place. I hope y’all enjoy this record as much as I did making it.”

Bare Bones is the latest project from T. Graham Brown for Time Life, which reissued five of his albums earlier this year including ‘T. Graham Brown Lives!’ (which hadn’t been available in nearly 20 years), ‘From a Stronger Place’, ‘The Next Right Thing’, ‘Christmas with T. Graham Brown’, and his GRAMMY-nominated album ‘Forever Changed’ (featuring Leon Russell, The Oak Ridge Boys, Steve Cropper, Jimmy Fortune, and more). All are currently available on major digital and streaming platforms.

About T. Graham Brown:
T. Graham Brown has recorded 15 studio albums and charted more than 20 singles on the Billboard charts. He has had multiple number one hits in country, gospel, and blues. Brown’s voice is also recognized from his singing in advertising campaigns for McDonald’s, Disneyland, Almond Joy, Coca-Cola, Dodge Truck, Ford, Hardee’s, and many others including the Taco Bell ‘Run For The Border’ television spots. In early 2015, Brown released his latest Grammy-nominated album, Forever Changed, which featured collaborations with Vince Gill, Jason Crabb, The Oak Ridge Boys, Jimmy Fortune, and more. In 2019, Brown became part of the SiriusXM family as host of Live Wire with T. Graham Brown airing monthly on SiriusXM’s Prime Country Channel 58. In 2020, Time Life partnered with T. Graham to reissue several of his classic albums, including his new acoustic album Bare Bones. T. Graham Brown still actively tours throughout the year, including multiple appearances on the legendary Grand Ole Opry and television appearances such as Larry’s Country Diner and Country’s Family Reunion. Brown’s uniqueness has made him one of the most beloved and iconic performers of the day.

About Time Life:
Time Life is one of the world’s pre-eminent creators and direct marketers of unique music and video/DVD products, specializing in distinctive multi-media collections that evoke memories of yesterday, capture the spirit of today, and can be enjoyed for a lifetime. TIME LIFE and the TIME LIFE logo are registered trademarks of Time Warner Inc. and affiliated companies used under license by Direct Holdings Americas Inc., which is not affiliated with Time Warner Inc. or Time Inc.