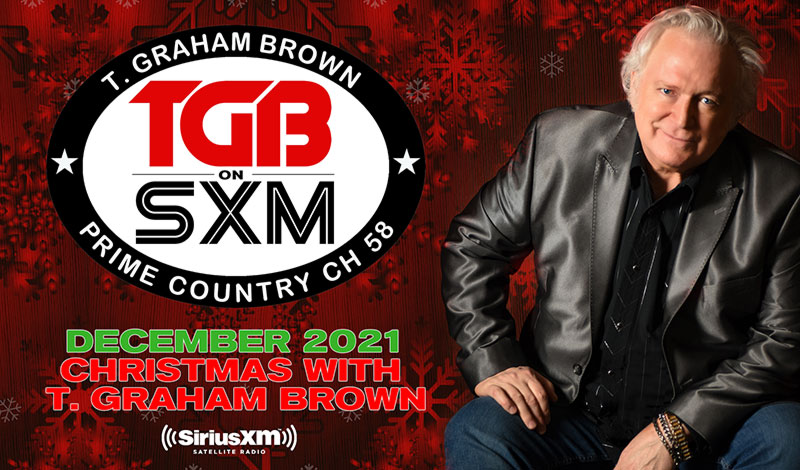 NASHVILLE, Tenn. – Starting Wednesday, December 8 at 10/9c, country hit-maker T. Graham Brown will host another exciting month of live cuts with some of his closest friends and heroes on the new episodes of LIVE WIRE on Sirius XM’S Country Christmas Channel 58. Make sure to tune into December’s episodes for some Christmas favorites recorded live at SiriusXM’s Music City Theater in Nashville, Tennessee.

“It’s that time of year again and I went through all of the archived Christmas shows that were recorded live at SiriusXM’s Music City Theater located in The Bridgestone Arena and picked out some treasures that we all love,” shares Brown. “While you’re wrapping presents, be sure to tune in for your Holiday favorites and remember, San-T’s on his way!”

Brown will also be spreading holiday cheer and helping people enjoy a Tennessee Christmas with a slate of performances that will include Christmas songs along with his hits. ‘Christmas With T. Graham Brown’ at The Donoho Hotel in Red Boiling Springs, Tennessee, continues through December 23rd. Each ticket to the show will include an all-you-can-eat “family-style” dinner, offering a delicious meal including traditional turkey, ham, green beans, and sweet potato casserole, pecan pie, and more! Ticket prices are $39.95, which includes an all-you-can-eat meal, show ticket & tax. The meal starts at 6 pm and the show starts at 7 pm. For more information, tickets, and reservations, call The Donoho Hotel at 615-699-3141.

About SiriusXM:
Sirius XM Holdings Inc. (NASDAQ: SIRI) is the leading audio entertainment company in the U.S., and the premier programmer and platform for subscription and digital advertising-supported audio products. Pandora, a subsidiary of SiriusXM, is the largest ad-supported audio entertainment streaming service in the U.S. SiriusXM and Pandora together reach more than 100 million people each month with their audio products. SiriusXM, through Sirius XM Canada Holdings, Inc., also offers satellite radio and audio entertainment in Canada. In addition to its audio entertainment businesses, SiriusXM offers connected vehicle services to automakers and directly to consumers through aftermarket devices. For more about SiriusXM, please go to: siriusxm.com.
# # #
Suggested post:
.@TGrahamBrown’s #LIVEWIRE show on @SiriusXM’s @SXMPrimeCountry Channel 58 premieres a new episode with @janiefricke @DiamondRioBand @GeneWatsonMusic @GreggAllman & more on Wed. Dec 8 at 10/9c